About Us » News » Award Presented to Pat & Alan Strachan

It is with great pleasure that at our last General Meeting we presented to Pat and Alan Strachan the Royal Agricultural Society of NSW Shows Award.
They have both been involved in the Goulburn Show for over 50 years in stewarding and judging, entering the flower, poultry and pigeon sections and helping set up the Rural Youth display and animal nursery when Rural Youth was going in Goulburn. 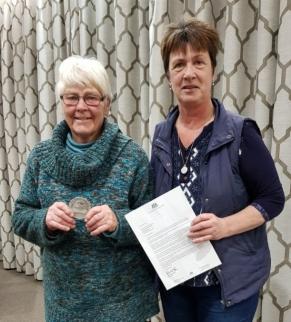 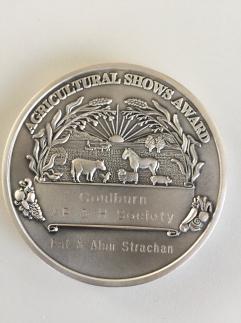 What a pleasant surprise it was when Pat came home with the RAS Award and Medallion.

On behalf of us both we thank you for the nomination and presentation.

For the newer members I give a brief outline of our involvement over the years.

We first came to Goulburn as young teachers in 1967 and showed our little black smooth-haired dachshund. Joined the A.P. & H. society in 1968. In that year I added a pair of OEG bantams to our  show entries.

In 1969 I became the Kennel Club representative on the show committee; became Dog Section show secretary in 1971 and held this position for approximately ten years; showing OEG large fowl and Modern Game bantams with some success at the same time.; in the late 1970s I also showed Budgerigars in the caged bird section. I continued stewarding for both the Dog and Poultry sections until 1992 when a house move meant a rationalisation of our live stock. However by then my main interest had become Dahlias and I stewarded in the flower section  One of the memories that remains with me was when we had over 800 dahlia exhibits filling the eastern half of the old pavilion. I succeeded Mrs Iris Roberts as the Flower section chief steward for some years when Max Ryan took over  and as you know Pat took over from him and is in that position at present.

Pat had helped in the showing of our dachshunds in the early years but in the 1980 became heavily involved in the running and organising of the Animal Nursery and the Rural Youth BBQ & drink stall together with Mrs Pat Hunt, for some twenty years. They were both Leaders of the  Goulburn Rural Youth(Junior Farmrs) at the time and the young members took great pleasure in displaying and looking after the live stock plus manning the stall situated outside of the Poultry Pavilion. There was njo skillion roofing in those days and little patronage of the space between the two pavilions..

Time flies when you’re having fun and it wasn’t until Pat showed me the Medallion and Award that I realised it has been fifty years of memorable experiences.